Samsung struggles to block iPhone function for the blind

You are here:
23 febrer, 2013Leave a commentGeneralBy Raquel Morales 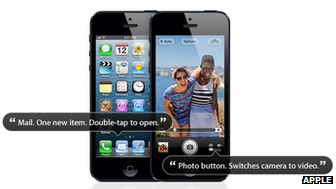 Samsung has suffered a setback in its effort to win an iPhone ban based on a function making its software accessible to blind people.

The South Korean firm had sought an injunction in a German court arguing Apple’s VoiceOver screen-access facility infringed one of its patents.

Compartir
FacebookTwitterLinkedInGoogle+Pinterest
About the author

This website uses cookies to improve your experience while you navigate through the website. Out of these, the cookies that are categorized as necessary are stored on your browser as they are essential for the working of basic functionalities of the website. We also use third-party cookies that help us analyze and understand how you use this website. These cookies will be stored in your browser only with your consent. You also have the option to opt-out of these cookies. But opting out of some of these cookies may affect your browsing experience.
Necessary Sempre activat

Any cookies that may not be particularly necessary for the website to function and is used specifically to collect user personal data via analytics, ads, other embedded contents are termed as non-necessary cookies. It is mandatory to procure user consent prior to running these cookies on your website.

Find my RSVP for Event Name

You have reserved space(s) for Event Name

We have email-ed you a confirmation to

Canviar la meva reserva
{"codes":{"err":"Required fields missing","err2":"Invalid email address","err3":"Please select RSVP option","err4":"Could not update RSVP, please contact us.","err5":"Could not find RSVP, please try again.","err6":"Invalid Validation code.","err7":"Could not create a RSVP please try later.","err8":"You can only RSVP once for this event.","err9":"Your party size exceed available space.","err10":"Your party size exceed allowed space per RSVP.","succ":"Thank you for submitting your rsvp","succ_n":"Sorry to hear you are not going to make it to our event.","succ_m":"Thank you for updating your rsvp","succ_c":"Great! we found your RSVP!"}}